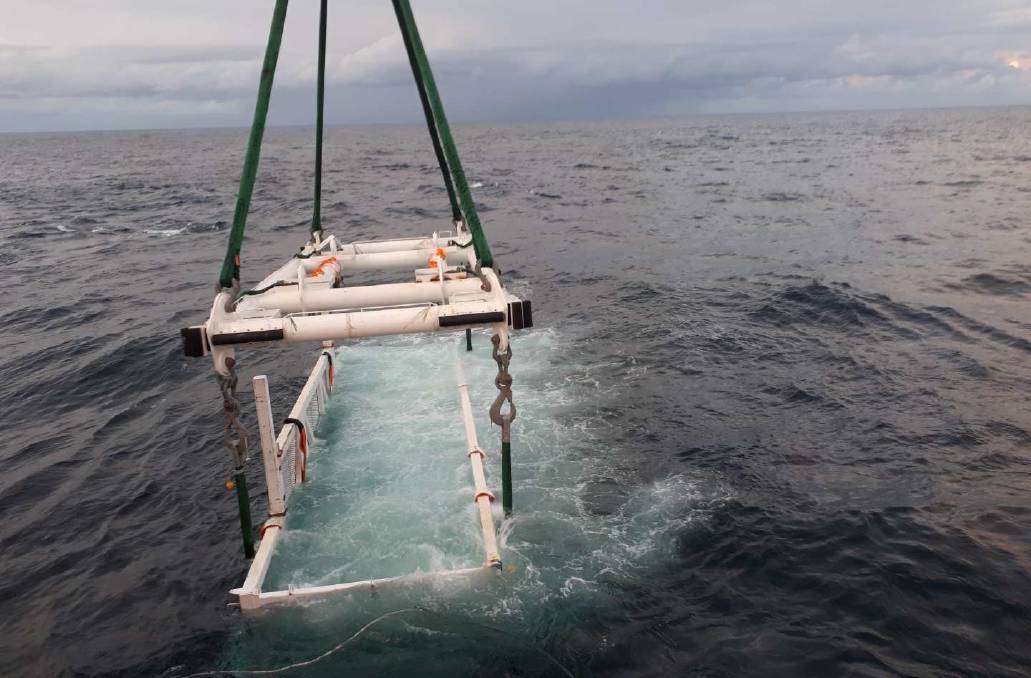 In April and May this year an environmental recovery team from the small seaside town of Kiama retrieved 63 of the containers working alongside specialist maritime salvage company Ardent Oceania.

The project led by Ryan Burke involved raising the containers to the surface before the contents were removed and sorted for reuse, recycling and disposal.

The six-week operation was completed in early May just weeks before rough seas resulted in another 40 containers falling into the ocean from the APL England off the Illawarra coast.

A further 70 containers were displaced in the wild conditions at sea on Sunday forcing the ship bound for Melbourne to about-turn and make a beeline for Brisbane.

As contents and some of the 40 containers wash up on Sydney and Central Coast beaches the latest event is likely to trigger another major salvage operation.

And the man likely to be called in to oversee the work is Mr Burke.

He successfully project managed the seemingly impossible mission of bringing 63 containers back from the sea floor.

But he has also been involved in salvage work, waste management and cleaning operations following many major incidents impacting the environment.

They include remediation from a multi-vehicle accident and fuel tanker fire on the M1 Princes Motorway at Figtree that killed two people in January 2019. The Iron Chieftain fire at Port Kembla Harbour in June 2018. And the C-130 Hercules firefighting aircraft crash near Cooma that killed all three on board in January, 2020.

But he is surprised by the number of incidents he has been called to since founding Avcon Projects four years ago.

The business specialises in project managing salvage operations and regularly works alongside maritime salvage specialists from Ardent Oceania which was the salvage partner for the Newcastle container recovery operation..

The Port of Newcastle where the containers were brought in during the salvage operation.

Mr Burke said he liked working with the Ingleburn company that has all the equipment necessary for a recovery at sea operation.

His own eight-member team saw many interesting things while they were based in Newcastle to retrieve hundreds of tonnes of container contents from the sea floor.

Their mission was to sort it for re-use, recycling or disposal.

Among the more unusual items they found were two Chevrolet Silverados inside one of the containers.

"They were in such bad shape we just scrapped them. They ended up in a recycling stream.

"We had a subcontract excavator on the ship cutting up the containers because they were a bit worse for wear.

"The cage on the ship we used in the recovery of the containers cost hundreds of thousands of dollars to engineer.

"Some of the containers coming out of the sea were full of water and weighed up to 80 tonnes. And the crane on the ship could lift 250 tonnes.

"It was a big engineering process. On shore we still had to handle containers of up to 40 or 50 tonnes once the water was drained.

"Avcon Projects did most of the land based activities. The environmental and waste management component is our specialty.

"Cardboard was the most difficult and hardest thing to deal with. It was lodged in amongst all the products we were trying to separate.

"It is surprising the broad range of products that are in shipping containers. We found everything from furniture to food".

In total 81 containers were lost from the YM Efficiency while it was sailing from Taiwan to Sydney in May, 2018.

While 18 were never found the successful retrieval of 63 has dramatically reduced the environmental pollution and long term impact on the NSW coastline.

"After containers were recovered from the sea we brought them into the Port of Newcastle where we had a sorting recycle yard," Mr Burke said.

"We pulled apart the contents and disposed and recycled where we could and then sent the containers off for scrap.

"The Australian Maritime Safety Authority engaged a surveying company to locate the 81 containers that fell from the YM Efficiency. Our task was to go and recover them.

"The location of 18 was not identified in surveys. We have no idea where they are.

"We recovered the 63 containers from the sea in a specialised basket arrangement. It was a pretty unique engineering at sea.

"The depth of the containers averaged between 70 and 130 metres. Most of them were full of tyres, furniture, chip packets, plastic bottles, container houses, bathroom pods.

"Everything you could imagine was in there.

"The containers were shipped into the Port of Newcastle where we craned them off and emptied them at a facility we put together". 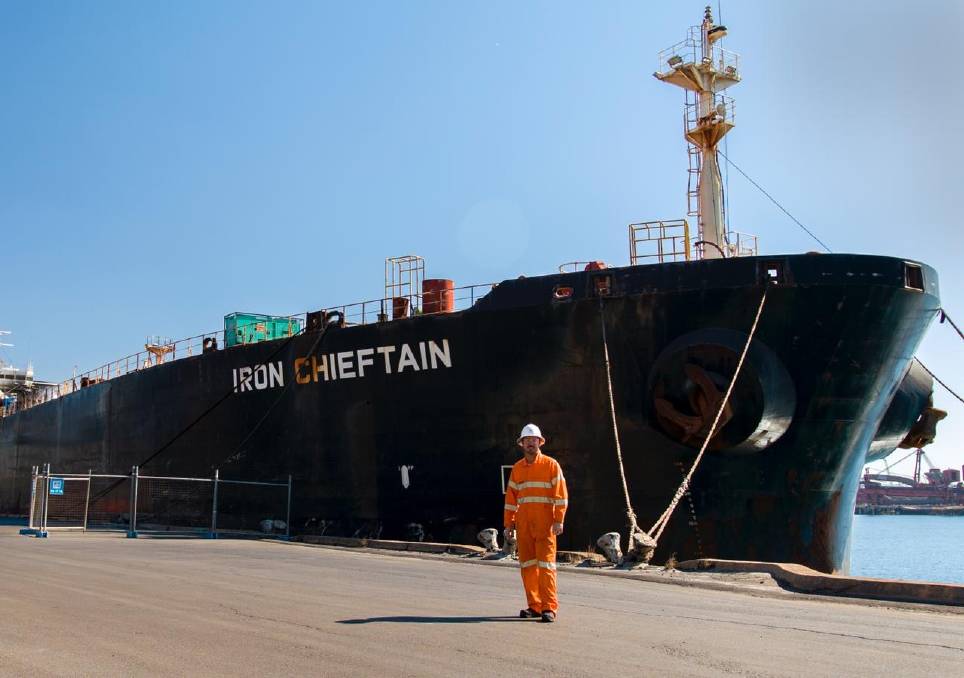 Environmental saviour: Ryan Burke has been called in after many major incidents in NSW such as the Iron Chieftain fire at Port Kembla in 2018.

Australian Maritime Safety Authority funded the salvage operation after an overseas insurer did not want to pay for the clean up.

Mr Burke said AMSA has a post on its website promoting the importance of not polluting Australian waters.

Having lived in Kiama all his life he knows how important, beautiful and fragile the marine environment is.

He is passionate about the work but won't have far to travel if his company wins the contract to project manage the latest container spill off Wollongong.

Mr Burke said NSW Maritime is leading the charge in cleaning contents and containers washing up on NSW beaches and has already invited his team to help.

Australian Maritime is likely to commission the next sea salvage operation. But it won't be easy because the APL England was further off shore.

"The containers that sink are likely to be seven or eight times deeper," he said.

"I am lucky to be getting some really high profile jobs. The Iron Chieftain was a really big one. We did that with the same project partners and it was a pretty successful.

"All our incidents are unfortunate. Such as the plane crash recovery job we did near Cooma. After the firefighting aircraft that went down we did that remediation. But not many people know we are around". 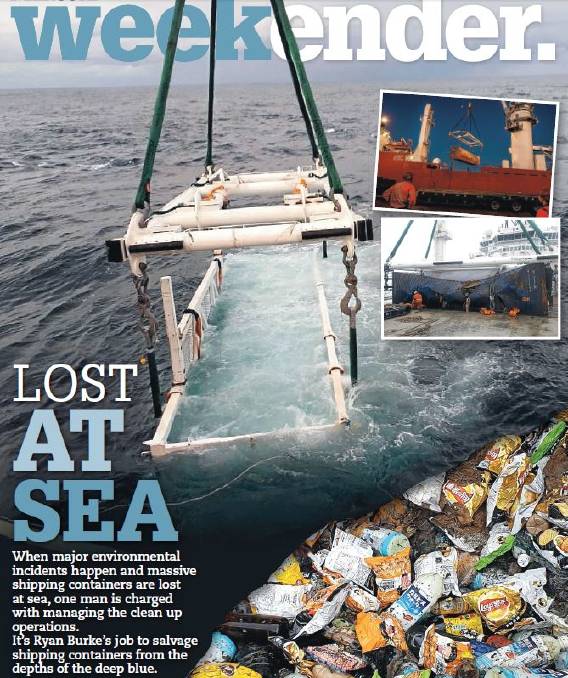 This story Meet the man called on twice in two years to help save our coast first appeared on Illawarra Mercury.