Aged care residents and their families have been greatly distressed by notification last Friday from RSL Lifecare that the intended closure of Roy Wotton Gardens means 24 elderly residents will have to relocate.

There has since been further contact to indicate consultation will take place about next steps, and concerned family members have been told challenges with the building and staffing are the reason for the closure.

Largely funded by the local community almost 30 years ago, Roy Wotton Gardens, formerly Nullica Lodge, has been a highly sought after facility in the region.

An employee of RSL Lifecare has come forward and said that follow up communication with affected parties "has seemed like a bit of damage control".

"They're saying it's not fit for high care residents anymore," the employee, who wished not to be named, said.

"They are definitely going to close it now, but have decided they have to do it the right way, hence the community consultation rather than just a blunt letter at 5pm on a Friday.

"They said that letter wasn't meant to come and had a lot of inaccurate information, but I don't really buy that. I can't see a middle management person sending it without being approved by someone higher up.

"I guess they wouldn't have known the provenance of the building, that it was paid for by our town," the employee said. "Formed by the area committee at the time, the voluntary committee kept it going for years," Mr Dickenson said.

"They deserve full marks for getting the facility in the town.

"That land was put aside in 1926 for a proposed hospital site and as it was prime residential land we knew if we didn't do something with it we would lose it.

"Nearly every group in town did something to raise money for the hostel, that was almost 30 years ago. We raised around $400,000 and the government and council tossed in about $500,000," Mr Dickenson said. 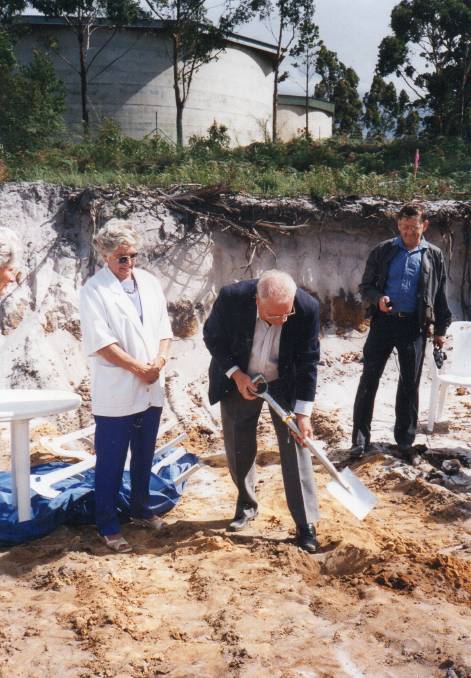 A spokesperson from RSL LifeCare said older Australians have increasingly chosen over the last 10 years to remain in their own homes for as long as possible before moving into communal aged care facilities with 24 hour high-level care.

"This has been a deliberate policy of government, and an increasingly popular choice for older Australians," the spokesperson said.

"The home originally opened for residents with lower-care needs. However, as a result of changing community needs, it houses 24 residents today with mostly high-care needs.

"The rooms were not originally designed for the use of mobility aids like wheelchairs and lifting machines to assist care staff move residents in and out of bed. In addition, the home has no onsite laundry.

"As a result, we are about to embark on a detailed consultation period with residents and their families about the best way to meet their needs.

"That may involve moving to a home nearby that has more fit-for-purpose facilities that would improve their quality of life.

"We apologise to residents and their families for any unintended confusion in the process to date," the spokesperson said.

The employee said the news of the closure was a great shame.

"I couldn't fault their care of residents, it's like a big family."

Beth Smith was among those family members to receive the email from RSL Lifecare regional manager Gail Worthington about the imminent closure of Roy Wotten Gardens and the need to move her father in 4-6 weeks.

"To say I was stunned is an understatement," Ms Smith told ACM as well as sharing her frustration on social media along with many others affected.

"This was a monumental announcement to the aged residents who were informed right on dinner time by their night staff. The night staff themselves were only informed within minutes of the closure being announced.

"No management was there to deal with the trauma to the residents and staff, nor to field phone calls from concerned family. I cannot believe that RSL Lifecare management would be so callous, heartless and thoughtless to disseminate this information in this manner."

Although a follow-up email from RSL Lifecare director of operations Matthew Filocamo was distributed on Saturday, seemingly backpedalling from the closure timeframe, Ms Smith - and others - weren't buying it. 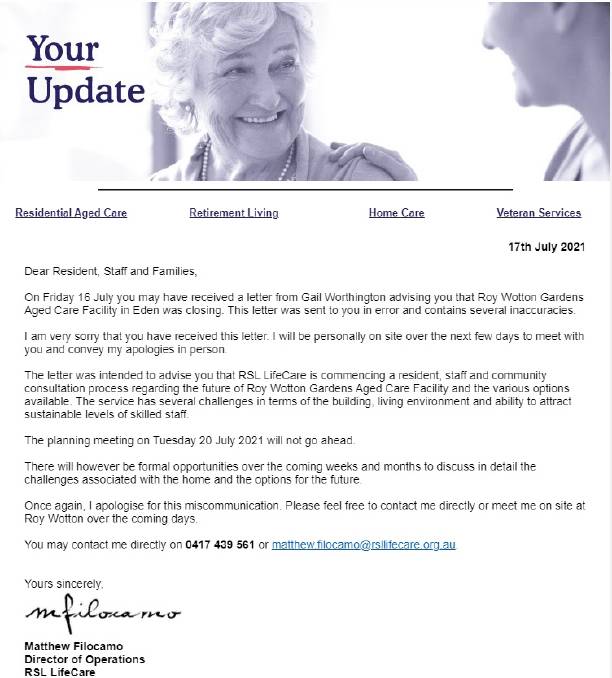 A follow-up letter sent by RSL Lifecare on Saturday, July 17.

"The follow up email means nothing. The fact that someone thought it okay to send that initial email out worded like that and at that time, with the delivery by traumatised staff, in the first place is horrific on so many levels," she said.

"With moving house being in the top few stressors in life, to expect 95-year-olds to have to do this is appalling. To forcibly split up the friendship groups forged especially over the last 18 months, inhumane.

"The good news is I know it's not the staff there. They are marvellous every day.

"It is the hardest thing to have to place your loved one in care, but made more palatable knowing that they will be cared for in a place such as this made it tolerable."

Mr Dickenson said the facility was highly sought after and that standard aged care rooms paled in comparison to those at Roy Wotton Gardens.

"For proud people that must have been something pretty bloody awful to face," he said.

"When this facility was planned and built with separate living and sleeping facilities we said it should be the benchmark for any future facilities built."

Mayor Russell Fitzpatrick said he was meeting with RSL Lifecare Monday afternoon to discuss the situation.

"Council will do everything they can to assist the residents," Mr Fitzpatrick said.

Ms Smith said she and her husband also had the opportunity to meet with Mr Filocamo on Monday morning.

"He apologised profusely with regards to Friday evening's 'miscommunication' and has stated to us that he was also horrified upon reading it," the Smiths told ACM.

"Further to that he assured us that nothing will change this year now, with consultation meetings to organised in October."

It is understood that Hugh Cunningham Gardens RSL Lifecare facility in Tura Beach is at about 60% capacity, so that may be offered as an alternative. Bupa Eden also currently has capacity for further residents.

Annette Guilfoyle, general manager at Bupa Eden said, "Most of all, we hope Roy Wotton Gardens has a secure future, and that any issues can be resolved without further disruption to the daily lives of the residents."

"If that can't be achieved, Bupa Eden stands ready to help however we can - whether that means permanent new homes for residents, short-term respite care, or jobs for care team members."