The journey of the "unknown soldier" to his final resting place at Westminster Abbey in London carries special significance for one Bega Valley man.

It has been 100 years since the unknown soldier was laid to rest on November 11, 1920, to honour and recognise the sacrifice of the hundreds of thousands who gave their lives during WWI, many of whom were buried in unmarked graves.

The centenary is a reminder of the unique role played by one Australian soldier, whose grandson John Dedman lives at Tura Beach. 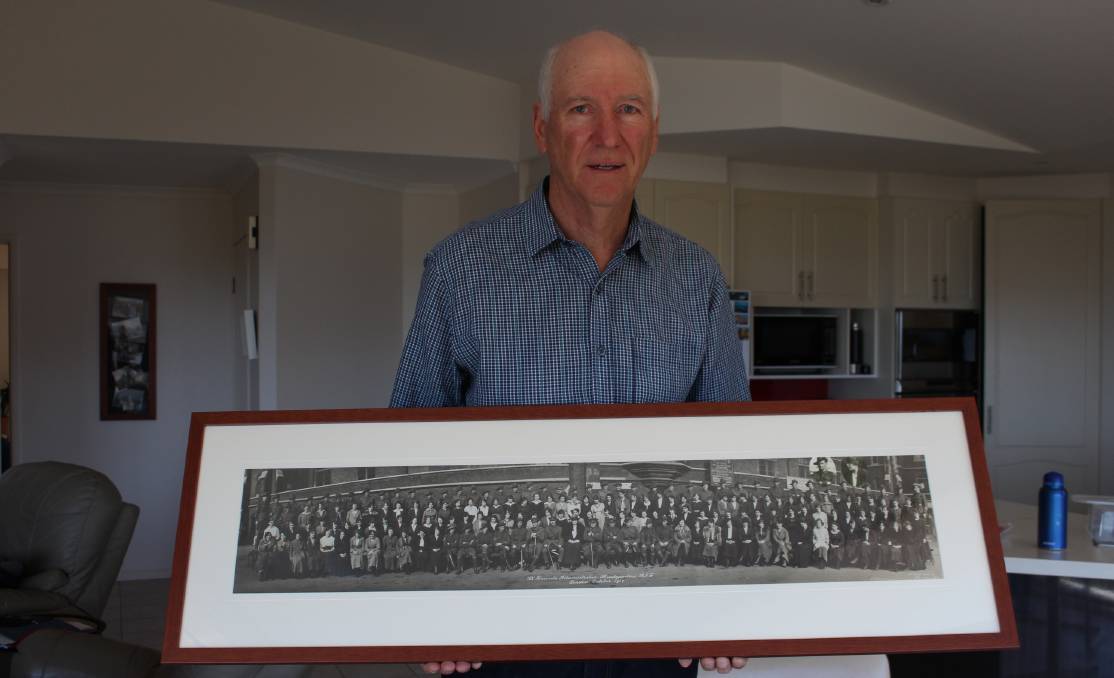 John Dedman holds a photo of all those working in the Australian Records "B" Section in London including his grandfather and his grandfather's wife (also shown in inset photos).

Mr Dedman recalls how his grandfather had a most unusual job in representing Australia 100 years ago.

"My grandfather Thomas Harley was the only Australian pallbearer for the unknown warrior, carrying and accompanying the body through the streets of Boulogne in France," Mr Dedman said.

There were eight pallbearers for the unknown soldier, six British, one Canadian and one Australian, Thomas Harley. 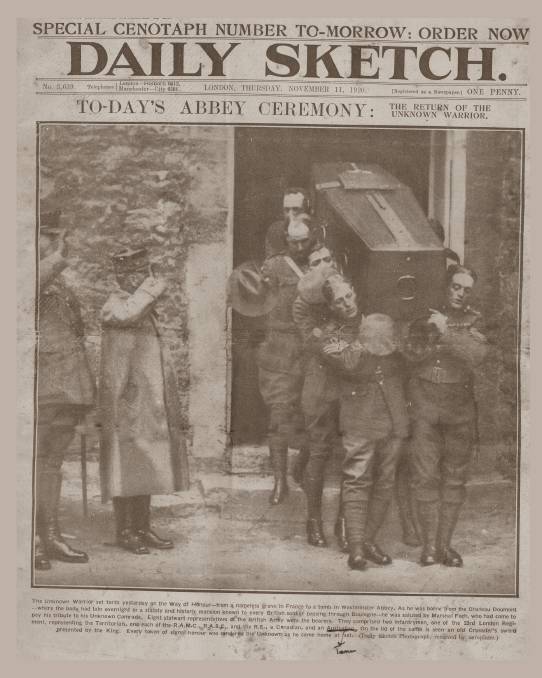 The British newspaper The Daily Sketch carried the photo on its front page on November 11, 1920 of the casket of the unknown soldier at Boulogne with pallbearer and Australian soldier Thomas Harley holding his slouch hat.

The body had lain overnight in the Chateau d'Aumont at Boulogne. The pallbearers carried the casket from the chateau to be placed on to a French gun carriage, drawn by six black horses. At 10.30am, all the church bells of Boulogne tolled; the massed trumpets of the French cavalry and the bugles of the French infantry played Aux Champs (the French Last Post).

Then, the mile-long procession - led by local schoolchildren and escorted by a division of French troops - made its way down to the harbour.

"They placed the unknown warrior on to the ship 'Verdun' for transportation to England where the body was buried at Westminster Abbey the next day," Mr Dedman said.

The French daily newspaper Excelsior, which reported on the journey of the unknown soldier - 'Le Tommy'.

At the quayside, Marshal Ferdinand Foch saluted the casket before it was carried up the gangway of the destroyer. Marshal Foch was marshal of France and commander of the Allied forces during the closing months of WWI.

Mr Dedman doesn't know how his grandfather was chosen for this historic role, but in many ways Thomas Harley must have been an obvious choice.

After enlisting, and at age 26 Thomas Harley was sent to England in May 1917 as a Company Sergeant Major in the Australian Infantry Force.

As a kid I remember seeing stacks of photos. After his death a lot of the photos were sent to the Australian War Memorial.

In civilian life he was a school teacher, but became a military clerk and photographer working in the Australian Records "B" Section in London. He also served with the Australian War Graves Commission in France in 1919 and 1920, rising to the rank of Warrant Officer Class 1.

READ ALSO: Under fire - the medic who cared

He had the grim duty of disinterring bodies which had been buried where they fell and organising reburial in war cemeteries.

As a photographer he travelled throughout France but was based at Villers Bretonneux, Mr Dedman said.

"As a kid I remember seeing stacks of photos. After his death a lot of the photos were sent to the Australian War Memorial," Mr Dedman said.

In fact the number of photos he had impacted the amount of other items Mr Harley and his English wife, who he met while working in the London office, were able to bring back to Australia. The couple started their married life living in a tin hut in Villers Bretonneux in 1920.

One of Mr Harley's sad duties was to photograph the graves of fallen Australian soldiers; for many families the photos they received were their only way of connecting with their departed loved one and paying their respects.

READ ALSO: Anzac Day 2020 a memorial service like no other 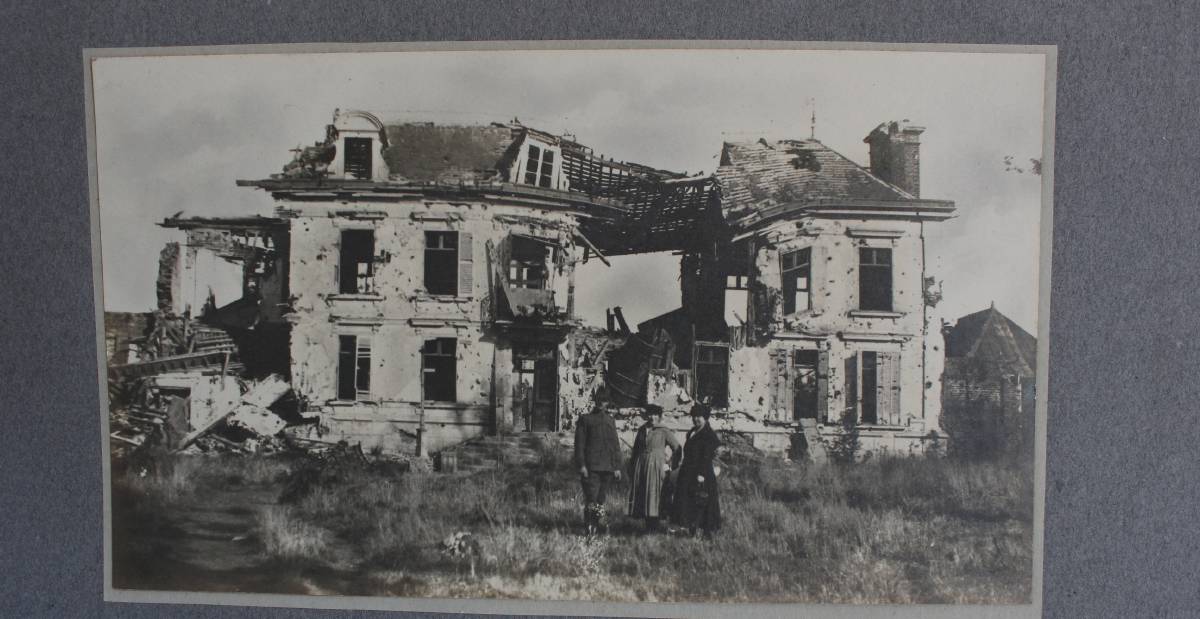 One of Thomas Harley's many photographs captured as he travelled throughout France.

The work continues to identify the fallen

On the eve of Remembrance Day the final resting place of five previously unidentified Australian soldiers who served and died in France during WWI have been confirmed.

Minister for Veterans' Affairs and Minister for Defence Personnel Darren Chester said the men were originally buried as unknown Australian soldiers, but thanks to the hard work of Fallen Diggers Incorporated, the Australian Army's Unrecovered War Casualties team and the Commonwealth War Graves Commission, they had now been identified. 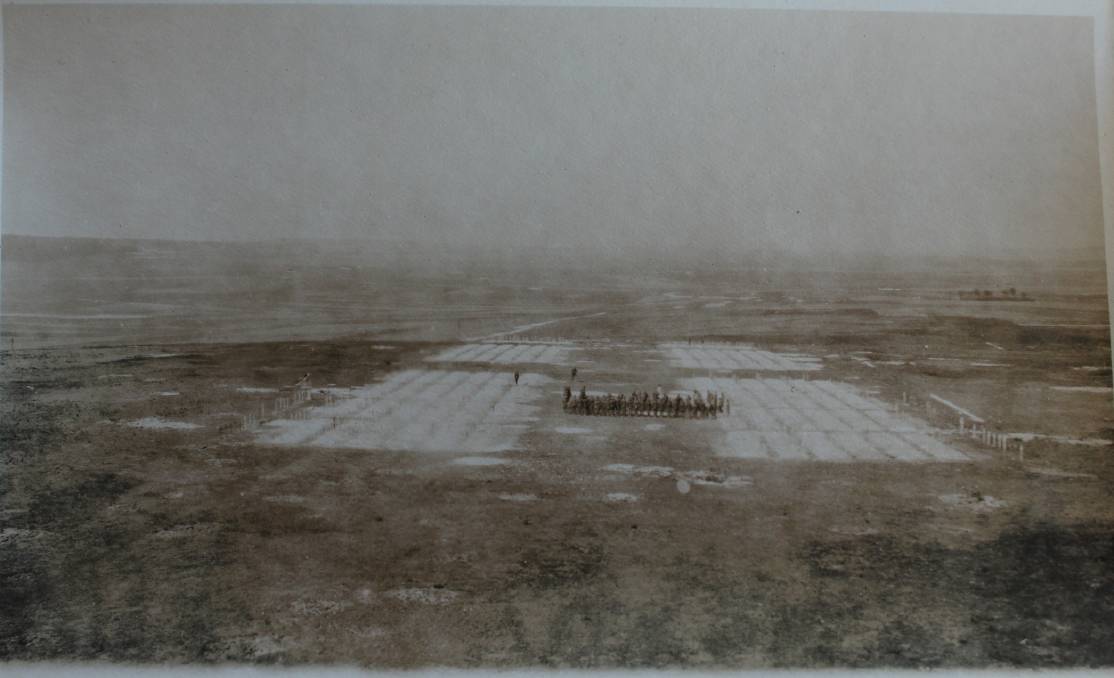 A photo taken by Thomas Harley of the Villers Bretonneux graves.

The soldiers were identified as:

Mr Chester said notations on original grave records provided some details, however, further investigation had allowed the identity of these men to be conclusively proven.

"I would like to acknowledge the ongoing work of Fallen Diggers who have helped identify 32 Australian First World War soldiers," Mr Chester said.

"In consultation with the men's descendants, the Australian Army, Commonwealth War Graves Commission and the Office of Australian War Graves will make arrangements to replace the previously unmarked headstones with new ones, bearing the soldiers' names and service details.

"It is sobering to think that more than 100 years on we are still identifying those who made the ultimate sacrifice as part of the First World War. Lest we forget." 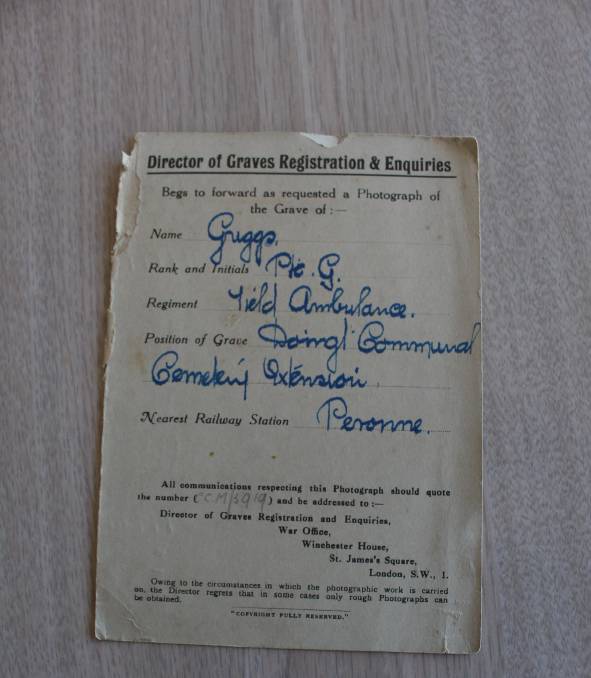 A formal request for a photograph of the grave of Pte Griggs from the Field Ambulance Regiment with instructions on it locality and the nearest railway station.

The story behind the Tomb of the Unknown Warrior

The Tomb of the Unknown Warrior holds an unidentified British soldier killed on a European battlefield during WWI. He was buried in Westminster Abbey, London on November 11, 1920, simultaneously with a similar interment of a French unknown soldier at the Arc de Triomphe in France, making both tombs the first to honour the unknown dead of WWI.

It is the first example of a Tomb of the Unknown Soldier. The battlefield that the Warrior came from is not publicly known, and has been kept secret so that the Unknown Warrior might serve as a symbol for all of the unknown dead wherever they fell.

The idea of a Tomb of the Unknown Warrior was first conceived in 1916 by the Reverend David Railton, who, while serving as an Army chaplain on the Western Front, had seen a grave marked by a rough cross, which bore the pencil-written legend 'An Unknown Soldier of the Black Watch'.

He wrote to the Dean of Westminster in 1920 proposing that an unidentified British soldier from the battlefields in France be buried with due ceremony in Westminster Abbey "amongst the kings" to represent the many hundreds of thousands of Empire dead.

A secret beyond the grave

(Courtesy of the Royal British Legion)

"Suitable remains were exhumed from six principal battlefields - The Aisne, Marne, Cambrai, Somme, Arras and Ypres - and brought to the chapel at St Pol near Arras, France on the night of November 7, 1920.

"The bearer parties were immediately returned to their units and a guard placed on the door. At midnight Brigadier General L.J. Wyatt and Lieutenant Colonel E.A.S. Gell of the Directorate of Graves Registration and Enquiries went into the chapel alone. The remains were on stretchers, each covered by a Union Flag: the two officers did not know from which battlefield any individual body had come. General Wyatt with closed eyes rested his hand on one of the bodies. The two officers placed the body in a plain coffin and sealed it. The other bodies were then taken away for reburial.

"The coffin stayed at the chapel overnight and on the afternoon of November 8, it was transferred under guard, with troops lining the route, from St Pol to the medieval castle within the ancient citadel at Boulogne. For the occasion, the castle library was transformed into a chappelle ardent: a company from the French 8th Infantry Regiment recently awarded the Legion d'Honoure en masse, stood vigil overnight. 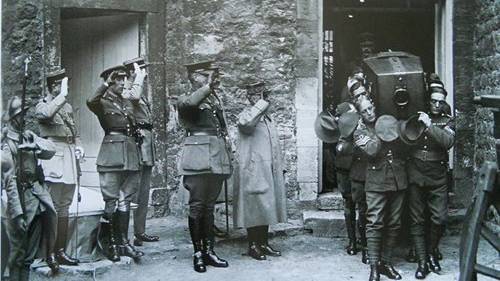 The oak casket is carried from the chateau at Boulogne.

"The following morning, two undertakers entered the castle library and placed the coffin into a casket of the oak timbers of trees from Hampton Court Palace. The casket was banded with iron and a medieval crusader's sword, chosen by the King personally from the Royal Collection, was affixed to the top and surmounted by an iron shield bearing the inscription 'A British Warrior who fell in the Great War 1914-1918 for King and Country'."

The Queen honours the Unknown Warrior

Last week in the lead up to Remembrance Day Sunday, the Queen honoured the Unknown Warrior at a small, private ceremony at Westminster Abbey.

The Unknown Warrior's final resting place became an important symbol of mourning for bereaved families, representing all those who lost their lives in the First World War but whose place of death was not known, or whose bodies remained unidentified. It remains a solemn tribute to all service personnel who have lost their lives in combat.

During the small private ceremony, a bouquet of flowers featuring orchids and myrtle - based on Her Majesty's own wedding bouquet from 1947 - was placed on the grave of the Unknown Warrior in an act of remembrance.

During the wedding of Lady Elizabeth (The Queen Mother) and King George VI in 1923, Lady Elizabeth paused on her way down the aisle to lay her bouquet on the grave of the Unknown Warrior, in memory of her brother Fergus who was killed in 1915 at the Battle of Loos during the First World War.

Lady Elizabeth became the only Royal bride to walk down the aisle without her bouquet.

But the gesture has became tradition and her spontaneous action of remembrance created a tradition for other royal brides to follow, and in 1947 Queen Elizabeth II also laid down her bouquet, as did, among others, The Princess Royal, The Countess of Wessex, The Duchess of Cambridge, The Duchess of Sussex and both Princess Beatrice and Princess Eugenie of York.

This story The Aussie who helped carry the Unknown Soldier to his final resting place first appeared on Bega District News.