It'll be a big day of footy at Narooma's Bill Smyth Oval, as teams have one final chance to play into next weekend's SCAFL grand final.

The season will end for the losers of today's matches, while the winners will advance to next weekend's big day at Merimbula's Berrambool Oval.

The under 12s will kick us off at 8am with a clash between the Narooma Lions and Merimbula Diggers.

Senior footy kicks off at 11.55am with the reserve-grade clash between Broulee/Moruya and Merimbula, followed by the women (Narooma v Tathra) at 1.20pm.

The senior clash will cap off the day at 2.45pm when Tathra takes on Pambula for a spot in the grand final.

Make sure to continue checking back in for all the scores as they happen. 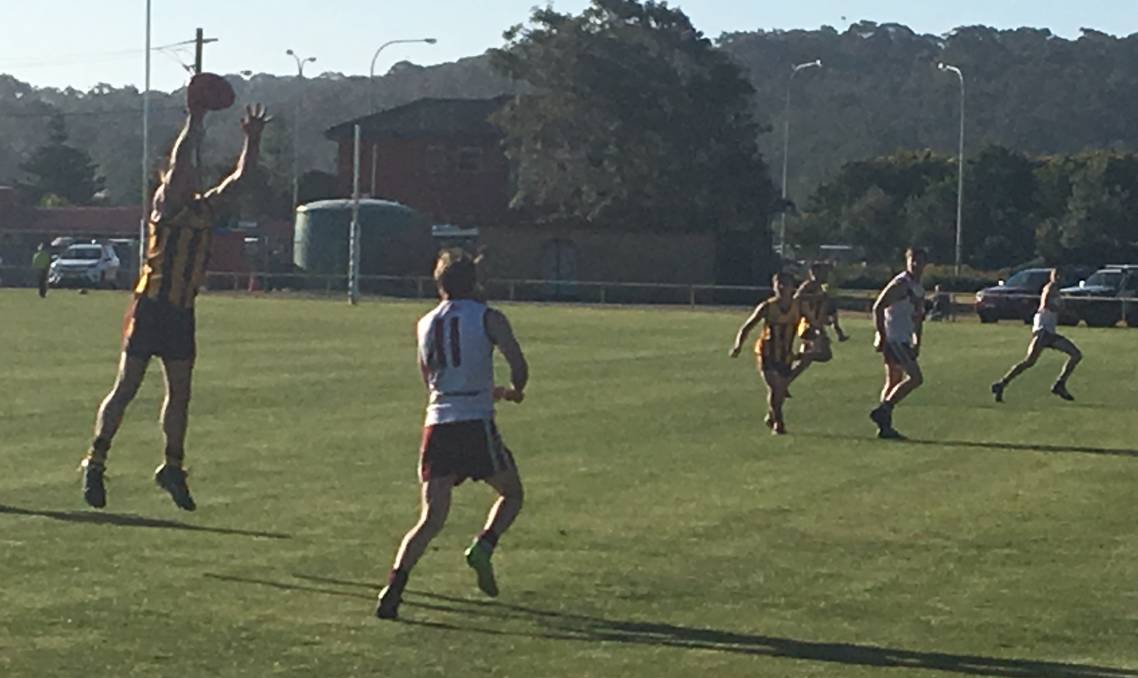 Tathra has claimed its place in the 2019 SCAFL grand final after disposing of Pambula at Bill Smyth Oval in Narooma.

The final score was 13.4(82) to 6.9(45), although it was a much closer game around the field than that scoreline might suggest.

The Sea Eagles were extremely accurate in front of goal while Pambula blew a few chances.

In a curious stat for the day, Tathra was the only team that won as the top-seeded side.

In every other game played on Saturday, the team that won the minor semi-final two weeks ago was able to defeat the team that lost the major semi last week.

Tathra will now play Merimbula in the SCAFL 2019 grand final at Berrambool Oval.

Full report and photo gallery will be online by Sunday morning (or when my laptop battery is recharged, whichever is sooner!). Thanks for joining us today.

Tathra was particularly dominant - and accurate - in the first quarter where they kicked five straight goals without hitting a behind. Adam Blacka has been a standout for the Sea Eagles.

Pambula was able to work its way back in tot he game, especially in the later stages of the second quarter. The Eagles controlled the tempo of the match throughout the final quarter, and snagged two important goals to hold on for the seven-point victory.

The Lions gave themselves some hope through a Rachael Kincaid goal with five minutes remaining, but Tathra held firm.

The Lions' loss means the hosts have lost two preliminary finals today, after their under 12s lost the first match.

Tathra's win means all five prelims have gone the way of the lower seeded team. So essentially, put your house on Pambula to win the seniors.

1.56pm: The Tathra Sea Eagles lead the Narooma Lions by five points at half time of the women's preliminary final.

The Sea Eagles, who qualified after Eden fielded ineligible players in the minor semi final, jumped the minor premiers with two goals in the opening 10 minutes of the match.

Narooma looked shell-shocked, but slowly worked its way back into the game through a potent midfield and forward line.

They kicked a single goal in the first quarter, then took the lead midway through the second through Rachael Kincaid. Awesome Foursome: Merimbula digs in to deliver fourth side to grand finals

1.15pm: Merimbula's reserve-grade side became the third side today to win a prelim in spite of trailing at three-quarter time, as they ran over the top of the Broulee/Moruya Giants to win by three points, 6.4 (40) to 5.7 (37).

The Diggers kicked two quick goals in the last, then held firm through a torrid final 10 minutes to send the minor premiers home.

The Giants had their opportunities, but were wasteful in front of goals as they succumbed to a straight-sets exit.

It also means Broulee/Moruya will be forced to wait another year to play in its first senior grand final.

Merimbula dominated the first quarter, but couldn't put it on the board as they only led by eight points at the first change.

The Giants hit back in the second, showing why they were minor premiers in a three-goals-to-one quarter. 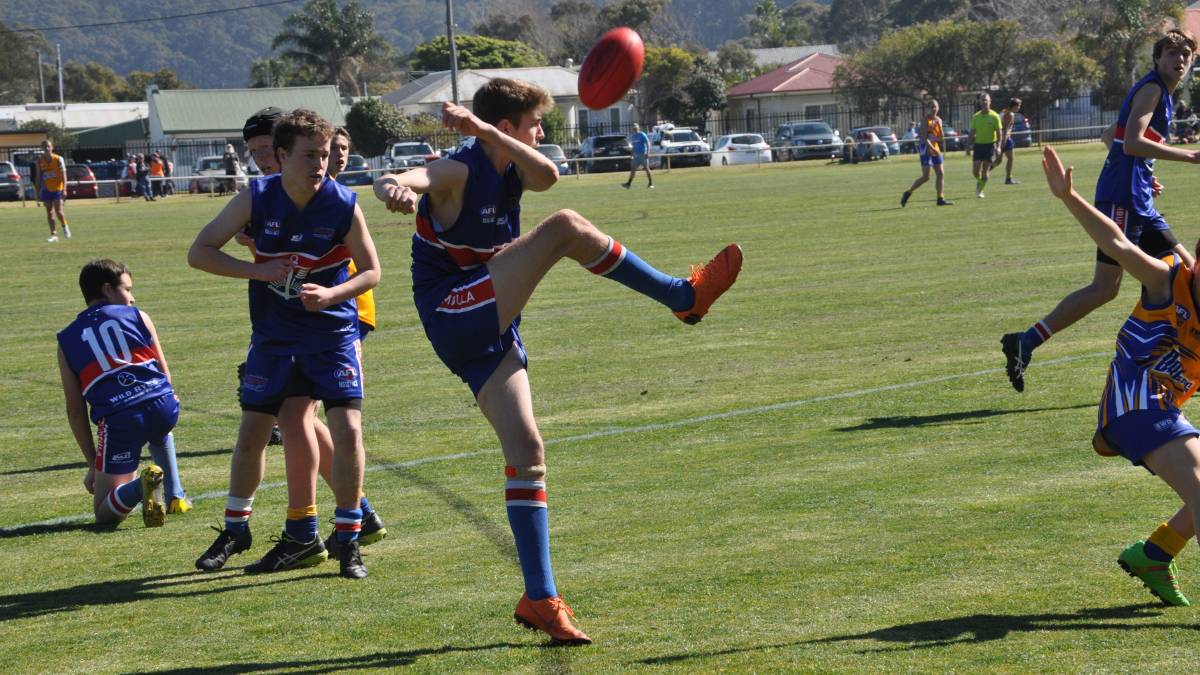 11.51am: A big second half from the Merimbula Diggers has seen them record a nine-point win over the Bermagui Breakers in the under 16s preliminary final.

The Diggers hit the accelerator after half time, and turned a four-point deficit into a 16-point lead at one stage in the last quarter.

Bermagui kept coming at the Diggers, and Campbell Moresi threatened to take the game away on his own in the forward line, but Merimbula had enough to keep the Breakers at arm's length and win 6.7 (43) to 5.4 (34).

The Breakers loss means all three sides who lost last weekend's major semi final have subsequently lost the preliminary final, a potentially bad omen for the Broulee/Moruya Giants in the reserve-grade prelim.

Breakers hold slim lead at half time of 16s

11.13am: Two goals from Scott Parsons has the Bermagui Breakers ahead of the Merimbula Diggers by four points at half time of the under 16s prelim.

The Diggers started the better side, keeping Bermagui scoreless to lead by eight points at quarter time.

Bermagui's Campbell Moresi had a chance to extend the lead after the half time siren, but his shot from 50 was off line. 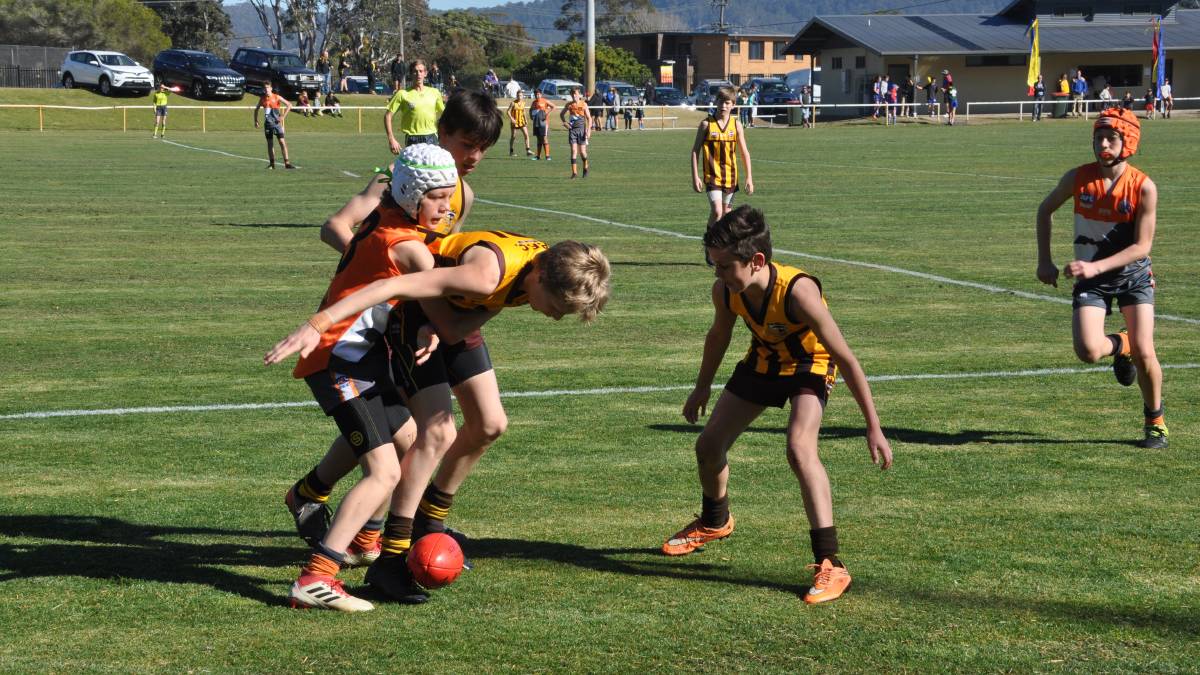 10.28am: Two quick goals at the start of the fourth term were enough for the Pambula Panthers to overhaul a 10-point three-quarter time deficit and advance to the under 14s final.

The Giants missed numerous chances to retake the lead throughout the term, and Pambula's defence hung firm for a 5.4 (34) to 4.7 (31) victory.

The Giants' loss means the minor premiers are out of the finals in straight sets, while the Panthers will advance to take on the Bermagui Breakers in next week's grand final.

Giants roar into the lead

10.08am: Two unanswered goals have the Broulee/Moruya Giants one quarter away from the under 14s grand final.

9.50am: Broulee/Moruya hit the front halfway through the second quarter, but another late goal to the Panthers has them five points ahead at the main break of the under 14s prelim.

The Giants started to get on top in the contest in that term, but will need to beat a Panthers team that is switched on for a big final.

Both the Panthers goals were the results of goal-mouth scrambles, but they deserve their lead after controlling the play through 1s5 minutes. 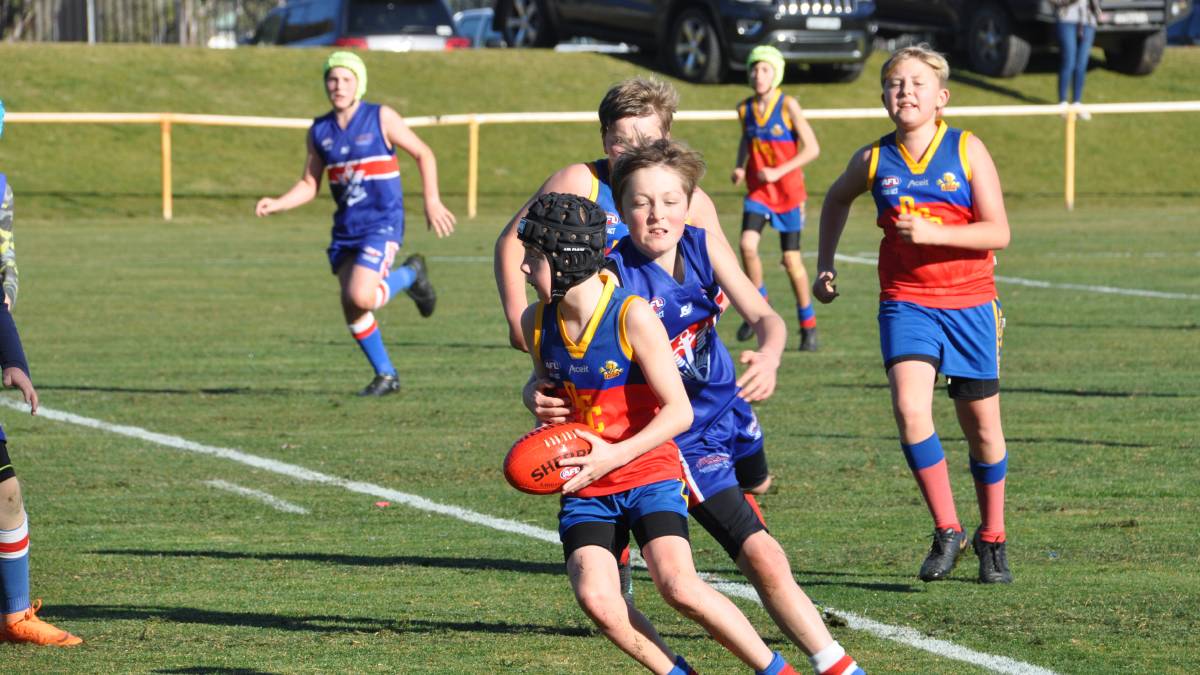 Merimbula was too strong for Narooma in the under 12s' prelim.

The Diggers dominated both possession and territory in the final term, and took the lead with seven minutes to play.

Narooma kept toiling, but struggled to generate scoring opportunities in a heart-breaking end to their season.

The Diggers will now play the Bermagui Breakers in next weekend's' grand final.

Lions get their noses in front

The Lions raced away to an eight-point lead midway through the term, but the Diggers dragged a goal back in the final minute to give themselves a sniff.

Tight start to under 12s

8.30am: You can't split Narooma and Merimbula at half time of the under 12s preliminary final, with the two sides locked at 1.1 (7).

The Lions kicked a point in the final 20 seconds of the half to tie the scores.

7.57am: We're here at Bill Smyth Oval, and it's a pretty cold morning with frost under foot. The Narooma Lions and Merimbula Diggers are warming up for the under 12s clash to get underway any minute now.

This story SCAFL Preliminary Finals: All the scores and reports from Saturday's footy first appeared on Narooma News.

Discuss "SCAFL Preliminary Finals: All the scores and reports from Saturday's footy"

Discuss "SCAFL Preliminary Finals: All the scores and reports from Saturday's footy"